Many community colleges are grappling with the notion of diversity, inclusion, and equity. Often, these three words are strung together, as if they are one thing. Leaders must be clear on these terms and steer their institutions so that they reflect the needs of their students. Clarity comes from understanding the history of higher education in the United States, especially the development of America’s community colleges.

The roots of community colleges are a mix of seemingly opposed grassroots and elitist movements in higher education to create access to the populace and also maintain the intellectual rigor of the university, respectively (see Cohen and Brawer). Community colleges now have a multi-pronged mission to serve the community through workforce development, associate degree and certificate attainment, preparation for university transfer, and lifelong learning. Over the last century, the American community college has gained prominence in contributing to local workforce development and creating greater access to higher education for minoritized communities. For instance, in 2009, president Barack Obama announced “The American Graduation Initiative: Stronger American Skills Through Community Colleges” that called for five million additional graduates by 2020. Thus, recognizing the strength of community colleges in advancing economic prosperity to millions of Americans.

There are roughly about 1,200 community colleges in America. Half the students in higher education in the United States are enrolled in a community college and the majority of students in the community college are non-white (see the American Association of Community Colleges Fast Facts 2018). Across most measures (completion, degree attainment, etc.), community colleges and four-year institutions struggle to close the racial achievement gap. Shapiro and colleagues (2017) found that “while almost one in four Asian students and one in five white students had completed [a] transfer pathway by the end of the six-year study period, just one in 10 Hispanic students and about one in 12 black students did” (p. 2). In other words, when disaggregated by race, retention and completion outcomes for minoritized students are less than those for white students. These data points are critical in understanding why community colleges are grappling with the notion of diversity, inclusion, and equity.

Some colleges are beginning to close the racial achievement gap. For example, with the support of the Achieving the Dream Network (ATD), Texarkana College has dramatically increased graduation rates for their Black students (by 18 percentage points from 2011 to 2017). They attributed their success to “an institutional commitment to evidence-based decision making, part of a holistic change model the team learned from their work with Achieving the Dream” (para. 7). The ATD’s vision, mission, and values are grounded in a commitment to equity. ATD “expects colleges to dismantle the barriers facing underserved students” (para. 12). While some colleges are making a difference in regard to equity, many are not. Yet, the equity movement is on the rise.

Have you seen this image before? 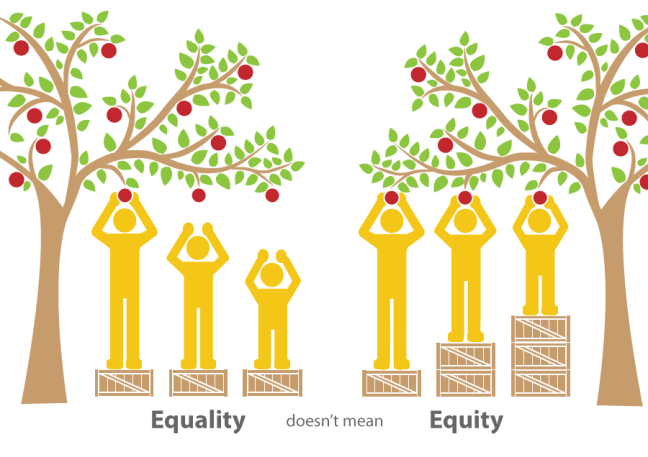 Three people reaching for some apples hanging from a tree. One person is tall, then second person is of medium height, and the third person is the shortest of the three. Only the tall person can reach the apples. The label on this image is equality. It demonstrates that all standing on the same ground equally, yet only one can reach the apple. The picture labeled equity shows the same three people. However, in this image, they all attain the apple. The shortest person receives two additional crates to stand on and the medium sized person receives one additional crate to stand on.

If you search for images related to the word “equity,” you’ll see a variety of interpretations of this concept of equality vs. equity. What also appears in a search for the term equity is a definition stating that equity is “the quality of being fair or impartial.” One of the synonyms listed is “egalitarianism.” The fiction that higher education is egalitarian is rooted in the idea that by providing access to higher education is enough to create present and future opportunities for a student willing to put in the effort to be successful. As a primarily open access institution, the community college has prided itself on providing opportunities for communities that otherwise would not have access to higher education (e.g., minoritized student populations such as Black/African American, Latinx, and Native American students). However, in the age of accountability (since the 1980’s), institutions of higher education have been pressured more and more by outside forces such as the public, legislatures, and accrediting agencies to be more accountable to outcomes including graduation, transfer, and job placement rates. The equity movement seeks to scrutinize these outcomes further and decidedly change the structures that create these outcomes.

Bensimon, Dowd, and Witham (2016) argued that to do equity work, one must be equity-minded. In other words, to be equity-minded is to have “an awareness of the ways in which many groups within US society have been historically excluded from educational opportunities, or marginalized within the structures and institutions that house those opportunities” (para. 1). They explained that this approach “foregrounds the policies and practices contributing to disparities in educational achievement and abstains from blaming students for those accumulated disparities” (para. 1). Thus, equity-mindedness requires educators to recognize that higher education has never been an egalitarian system.

The simplistic imagery of the three people picking apples leaves out a critical step. Leaders and stakeholders must engage in discussions about WHY we are generating inequitable outcomes (e.g., contemporary analysis, historical reflections). We must ask: What institutional structures disenfranchise our minoritized student populations? The self-examination can be performed through hiring external entities or from within the colleges. The results must be actionable plans that fundamentally reshape the institutions and improve the students’ experiences through the college that include instruction, advising, and co-curricular opportunities.

Diversity and inclusion are not pronouncements. They must be action oriented and radical interrupters of the status quo. Diversity must be about reflecting the people you serve (e.g., proportional representation). This is important because in higher education, the vast majority of employees are White, while the growing majority of students are racially and ethnically minoritized students. The disparity is even more so within the faculty and administrative ranks. However, having proportional representation must also be accompanied by a meaningful culture of inclusion. Inclusion requires on-going access to power structures, prominence in voice, and acceptance of difference for and by all members of the community. Thus, to create an inclusive culture there needs to be a foundation of equity principles that drive the work of sustaining a diverse environment. Equity requires dismantling structures of oppression and creating new structures that truly allow for inclusion and diversity. To achieve equity, we need to understand how we became inequitable.

It is no wonder that diversity, equity, and inclusion are often conflated. These are three separate concepts that are inextricably connected. Many leaders confuse these terms, treat them as one concept, or only focus on one at a time. A great leader will work on all three at the same time, understanding the nuances of how they interrelate, and engage in equity-minded practices.

To request insight about a topic in the community college, submit a question on the contact form.